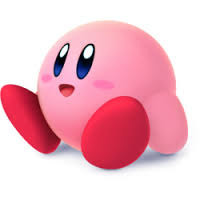 DO NOT PET WILD KIRBIES IN AMERICA. They may vibrate furiously as a defense instinct and become extremely dangerous and may attack at any time. This is likely believed to be because the Kirby has a hard time coping with being seen as a low-tier character in the most recent installment of Super Smash Bros., based on wandering near tournament venues, but Kirbies in Japan don't usually show this. However, we do have data on what kind of characteristics these cute but potentially dangerous creatures have.

Studies that our team of biologists show that Kirbies in America mostly show this possibly because not only the competitive scene of the game is mostly in America, which is why they are capable of wandering about the tournament venues and overhearing the conversations between tourney-goers, and it seems to know what it is called if it responds to such comments about the video game character of the same name, thus, it's possible this species is semi-sentient. A lot of Kirbies tend to have angry eyes on the cover of the US releases of the games of the video game chatacter of the same name and appearance, and this coincidentally also applies to most of the newly discovered wild Kirbies. Therefore it is unwise to approach a wild Kirby, as most wild Kirbies have the angry eyes, thus are aggressive. Wild Kirbies with no angry eyes and a peaceful demeanor still should not be provoked, since this can lead to the same result if an aggresive Kirby was approached.